If you are a sake drinker with an intermediate level of sake knowledge, you may recognize the types of sake as Junmai, Ginjo and Daiginjo as depending on the polishing rate of the rice, the main ingredient of sake. To be at an advanced level, you may be expected to know what Kimoto style is.

In short, Kimoto is traditional sake making method, where nature is left to take its course. Brewers wait patiently as naturally occurring Lactobacillus (lactic acid bacteria) grows within the shubo to fight off unwanted bacteria. In other words, it is “old school”. It is true that all sake made before 1910 was  artificially accelerating (by adding lactic acid), and “Sokujo style” was introduced under the leadership of the government-sponsored program for Kimoto sake. However, today, a Kimoto sake is rare because producing it requires more time, labor and skill. 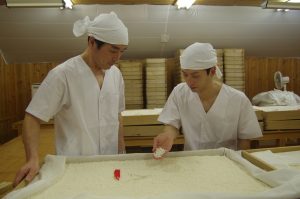 Under the Sokujo (literally means “accelerated fermentation”) method, making shubo (sake starter) takes 2 weeks, whereas Kimoto (meaning “natural starter”) takes approximately a month, which involves the labor-intensive “yamaoroshi” method, a manual mashing and stirring of the puree with oar-like paddles to enhance rice saccharification. This requires a longer time for the yeast to begin fermentation.

As explained, the Kimoto method uses rice, koji and water – only natural ingredients.

Because Kimoto allows more wild yeasts and bacteria to become a part of the brew, the flavor tends to have higher sweetness and acidity, with richer, deeper, significantly more pronounced flavors.

Do you want to taste Kimoto sake now? Try Kurosawa Junmai Kimoto and Hatsumago Junmai Kimoto – both are well-known brands and are available in the US.

Full-bodied and earthy, yet light. Kurosawa features Kimoto’s richness and flavorful umami, which makes this sake a great pairing for meat dishes such as yakitori.

The light, refreshing aroma and clean crisp flavor of Hatsumago represents the highly sophisticated feature of Kimoto sake, which enhances the taste of seafood. 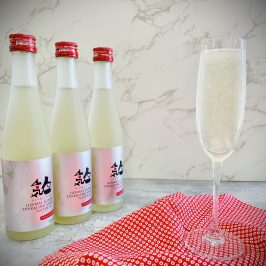 Did you know there are dozens of sparkling sakes available in America? In retail stores,...

Tobin-Kakoi is a once-in-a-lifetime sake that is ultra-super premium, extremely rare, and heavily awarded. Have...